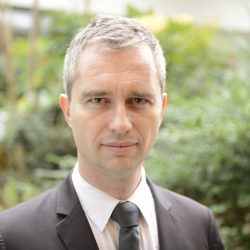 David Martinon was born on 13 May 1971 in Leiden (the Netherlands), and started out handling communication at the “General congress of the opposition” in 1990, before becoming a political communication and electoral marketing adviser at the company Acte Public Communication from 1991 to 1994. François Léotard, Minister of Defence, then recruited him as special assistant for communication in 1995.
After completing studies at the French National School of Public Administration (ENA), he joined the Ministry of Foreign Affairs and became, from 1998 to 2001, deputy spokesperson of the Ministry, which was then led by the socialist Hubert Védrine. He then became a desk officer at the European Cooperation Directorate (Department of Internal Community Affairs) in the same Ministry.
In May 2002, Nicolas Sarkozy, Minister of the Interior, made him his diplomatic adviser. In 2002, he was responsible for negotiating the closure of the Sangatte refugees centre. He played the same role (technical adviser for international and European affairs) when Nicolas Sarkozy was at the Ministry of Finance, then became diplomatic adviser again when the latter returned to the Ministry of the Interior.
He headed Nicolas Sarkozy’s 2007 presidential campaign.
Following the latter’s election as President of the Republic, he was appointed the spokesperson of the Presidency on 16 May 2007.
Upon his return to the Ministry of Foreign Affairs, David Martinon was appointed Consul-General of France in Los Angeles (California), and took up his functions on 18 August that year. At the end of his term in August 2011, he was appointed to the French Permanent Representation to the UN in New York during the General Assembly, with responsibility for human rights.
David Martinon was later appointed Special Representative of France for International Negotiations on the Information Society and the Digital Economy, on 3 May 2013. In October 2015, he was appointed Ambassador for Cyber Diplomacy and the Digital Economy, incorporating cyber security issues into his brief.